Widespread rain and thunderstorms across eastern and southern Australia

Storm season is set to kick off this week as widespread rain and thunderstorms affect parts of South Australia, Victoria, New South Wales and Queensland from today through until at least Friday.

Whilst the official start of storm season is October 1 across Australia, a typical storm season setup is unfolding across eastern Australia as a low pressure trough combines with humid onshore winds to bring the risk of thunderstorms over several days this week.

A few thunderstorms have developed across inland southern and central Queensland this afternoon, with the risk of localised large hail, damaging winds and heavy rainfall persisting into the evening today. However, activity isn't expected to be widespread.

Tomorrow, the trough will deepen as an upper level cold pool approaches from the west and the trough gains further moisture. This will cause thunderstorms to spread into NSW and northern VIC, as well as isolated thunderstorms developing over southeast SA near the upper cold pool, bringing the risk of localised small hail.

Thunderstorms will be most widespread on Wednesday afternoon and evening behind this cloudband over inland NSW and southern QLD. Wind shear will increase significantly as well over these regions along with a cooling upper atmosphere, bringing a significant risk of severe thunderstorms. Damaging to destructive winds, large to giant hail and very heavy rainfall are possible, although thankfully these severe storms will only affect sparsely populated regions. Isolated thunderstorms with small hail will also continue to affect southeast SA, western VIC and southwest NSW near the cold pool.

On Thursday, severe thunderstorms remain a risk, particularly over the NSW and QLD western slopes and plains, with large hail, heavy rainfall and damaging winds all a threat. Some areas of rain and thundery showers may also push into coastal areas later in the day.

On Friday, thunderstorms will focus mainly on northeast NSW and southeast and central east QLD. With strong wind shear persisting and high moisture levels, severe thunderstorms remain a risk in these regions and is likely to be the day where populated areas see the most impact.

By the weekend, drier westerly winds will push thunderstorms activity offshore apart from the risk of localised coastal thunderstorms on Saturday where moisture levels are higher. 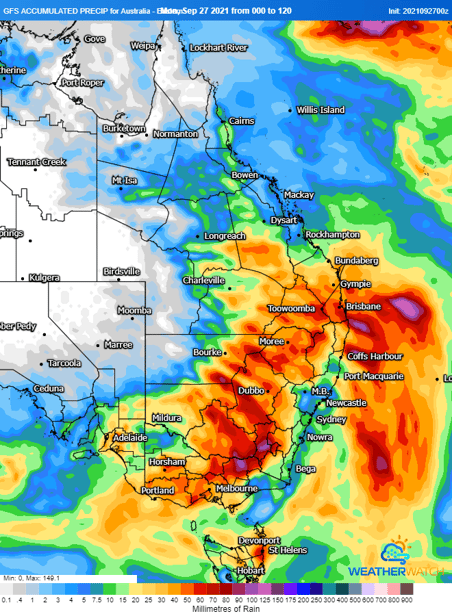 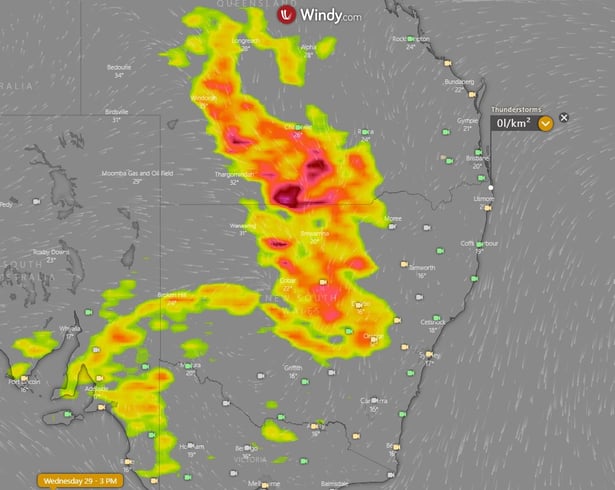 A trough in the west generated a band of mid-level thunderstorms across the Wheatbelt region of Western Australia overni...

END_OF_DOCUMENT_TOKEN_TO_BE_REPLACED

“The hail threat is likely to increase in Australia, especially in Australia’s south-east including the Sydney area.” - ...