Weather & Natural Hazards
Climatics is Australia’s most comprehensive database of historical acute and chronic severe weather hazards and warnings at any location since 1911.
Learn more
GO BACK
Everything your organisation needs to meet requirements on climate risks to people, assets and services.
Learn more
May 26, 2021

Warming up over WA ahead of rain and storms

After a cold and wet spell across large amounts of WA, temperatures will soar several degrees above average on Thursday before a complex weather event unfolds on Friday and over the weekend, bringing more rain, storms and potentially strong winds as well.

Temperatures plummeted earlier this week due to a strong cold front, with snow falling on the Stirling Ranges, and Perth having its coldest May day since 2013 topping out at 14.7 degrees. In contrast, temperatures in the Perth area and surrounds and along the south coast (except the far southwest where it will be several degrees cooler) are expected to reach in the mid 20s tomorrow, whilst those along the Central West and Gascoyne Coasts will see temperatures rise into the high 20s, even cracking 30 degrees in some areas.

The warmth will be relatively short lived, with a complex low pressure system beginning to affect the west coast from late Thursday, but especially from Friday. Areas of rain and storms will spread over the state from Exmouth to the southwest, reaching the South East Coastal and Goldfields areas on the weekend. Most storms will be high based and non-severe, however localised damaging winds are possible as well as localised flash flooding over parts of the Pilbara and Gascoyne.

Patchy rain will shift to the far east of the state on Sunday and clear most other parts, however some models indicate a low pressure system will deepen over the southwest of the state. Depending on where this system forms and the movement, heavy rain is possible on Sunday and into Monday with most models indicating the heaviest falls affecting between Albany and Margaret River. Depending on how intense the low is, wind gusts to 100km/h are also possible near the centre.

At this stage, widespread falls of 10-20mm are likely, with those areas affected by storms seeing 20-40mm. If the low does develop, falls in excess of 100mm are possible over parts of the southwest, with similarly heavy localised falls possible in the Exmouth area under storms.

Image 1: Accumulated rainfall across the next 96 hours from the GFS Model (Source: Weatherwatch Metcentre) 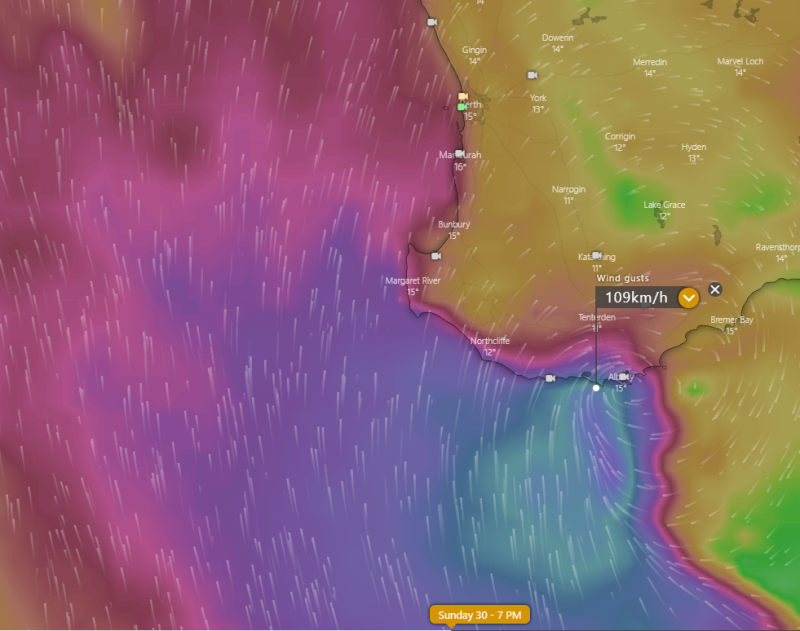 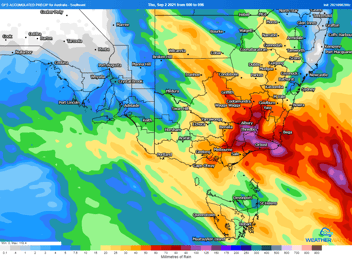