Weather & Natural Hazards
Climatics is Australia’s most comprehensive database of historical acute and chronic severe weather hazards and warnings at any location since 1911.
Learn more
GO BACK
Everything your organisation needs to meet requirements on climate risks to people, assets and services.
Learn more
Jun 07, 2021

A strong upper trough and cold front will move into South Australia on Monday, with a large band of showers, rain periods and isolated thunderstorms with small hail. Widespread falls of 15-25mm are expected, with isolated falls to 40mm possible. During Tuesday, the potential for damaging wind gusts to 90km/h will develop for southern and southeastern parts of SA as a strong and gusty southerly flow develops.

This system will continue to move across the eastern states into Tuesday, with widespread showers, rain periods and embedded thunderstorms expected from southern QLD into northern Victoria, with showers and snow flurries expected for parts of Tasmania.

Late Tuesday and into Wednesday, very cold upper level temperatures will move across northern Victoria, whilst pushing into northern NSW with further showers and isolated thunderstorms. Small hail can be expected with any activity, with snow expected to fall across alpine regions of Victoria and NSW, extending into elevated regions of the Blue Mountains and Northern Tablelands above 1000m Wednesday. Heavy snow is expected for alpine regions of NSW and Victoria with 50-100cm possible over the next 10 days, with the potential for 15-30cm across parts of the Blue Mountains, and 5-15cm to settle across parts of the Northern Tablelands.

On Wednesday, a low pressure system is expected to form off the southern NSW or eastern Victoria coast in response to the upper system. This low is expected to deepen rapidly, with heavy rain and damaging winds expected from the Illawarra region of NSW to Bairnsdale in Victoria. Flash flooding will be likely across this region on Wednesday and Thursday, with falls of 50-150mm possible however this is highly dependent on the exact position of the low. If this low is slightly further off the coast than forecast, rainfall totals may be downgraded. Damaging wind gusts may extend through central and coastal Victoria late Wednesday, and northern Tasmania. Gusts up to 100km/h are expected, with gusts to 120km/h likely for alpine regions.

Across the Granite Belt of Queensland, hail, graupel and the potential for snow flurries will exist for areas above 1000m on Wednesday, with the slight chance of another round of activity late Thursday.

This low in combination with a high in The Bight will slingshot a burst of very cold air north across Tasmania, Victoria, NSW and Queensland with heavy showers, rain, and snow continuing into Thursday. Below average temperatures are expected for an extremely large portion of eastern Australia, with Brisbane heading for a top of just 18°C Thursday, and Sydney 16°C with ‘feels like’ temperatures expected to be several degrees cooler. 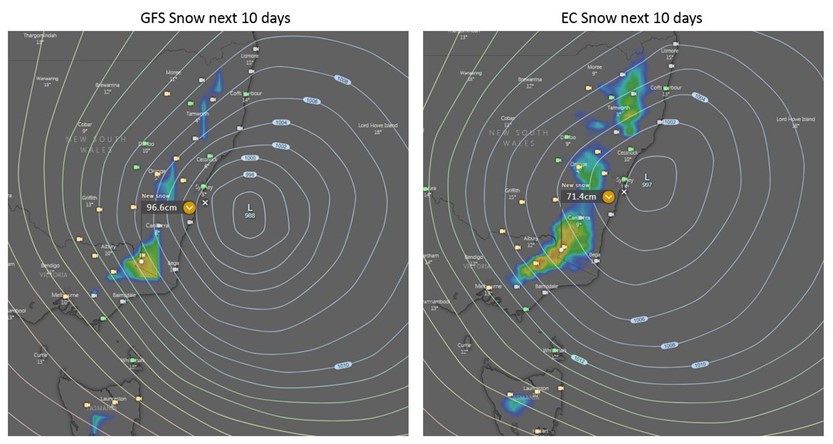 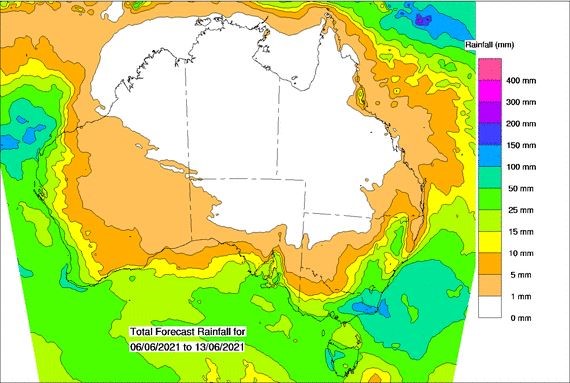 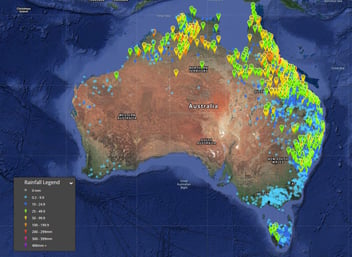 For the past few months, Australia has been sitting in a La Niña phase however most of the rainfall... 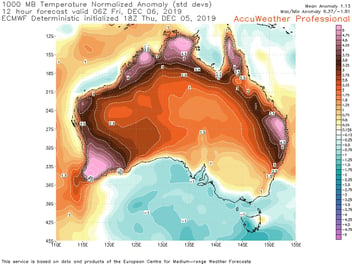