Weather & Natural Hazards
Climatics is Australia’s most comprehensive database of historical acute and chronic severe weather hazards and warnings at any location since 1911.
Learn more
GO BACK
Everything your organisation needs to meet requirements on climate risks to people, assets and services.
Learn more
Aug 03, 2020

Australia registers a dry and warm July, but wet spring ahead

July was another warm and dry month for much of Australia(after a warm and dry June), however a wetter pattern is likely over the comings months as a La Nina looms.

After good rain over parts of Australia during summer and autumn, winter has shifted back into a dry pattern for large parts of the nation. June was the third driest on record and third warmest since records began, with a similar story in July.

Daytime temperatures for July were 1.54 degrees above average, making it the seventh warmest July on record for the country. This was driven largely by the consistent lack of frontal activity and cloud over the country, with rainfall 43% below average for much of the country.

The dry weather was particularly pronounced in the south, with Tasmania registering its 2nd driest July on record (with Hobart itself seeing its 4th driest). Dry conditions extended into western Victoria, South Australia and Western Australia, with small pockets seeing their driest July on record. Adelaide had its 5th driest July, with records dating back to 1839, and the driest since 1924.

Over the east of the country, rainfall was much higher due to two east coast lows. Some sites in East Gippsland (VIC) and central and southeast NSW saw their wettest July days on record, whilst parts of southeast NSW registered their wettest July on record (monthly totals). These low pressure systems also caused significant beach erosion over parts of the east coast.

With the increased cloud cover, temperatures are likely to to cool closer to average across many parts of the country, but will likely remain warmer in the north. 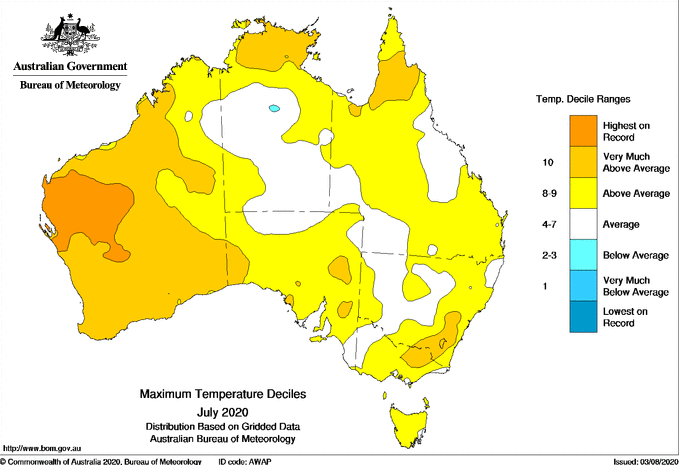 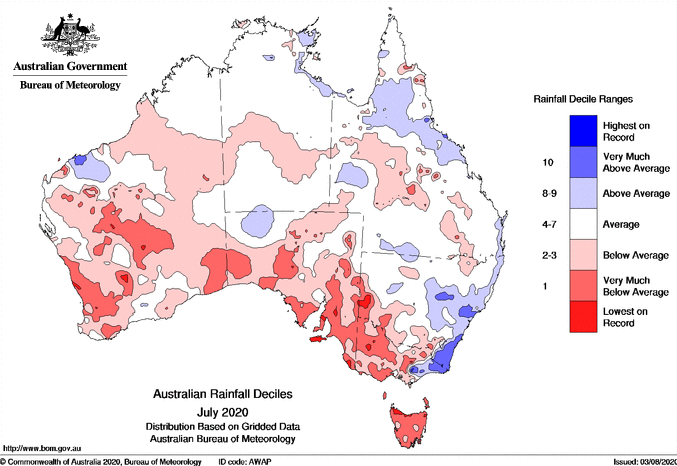 October 2020 was a warm and wet month across Australia, with most states and territories seeing...

The big dry has continued across Australia, with the nation just registering its driest September...