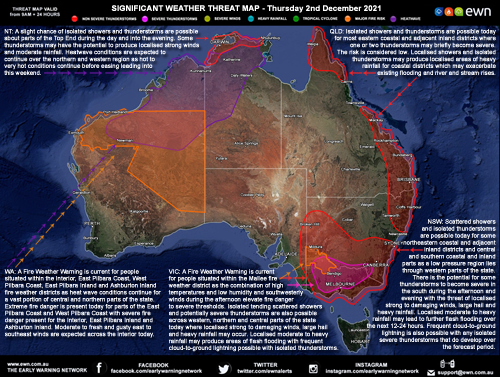 NT: A slight chance of isolated showers and thunderstorms are possible about parts of the Top End during the day and into the evening. Some thunderstorms may have the potential to produce localised strong winds and moderate rainfall. Heatwave conditions are expected to continue over the northern and western region as hot to very hot conditions continue before easing leading into this weekend.

NSW: Scattered showers and isolated thunderstorms are possible today for some northeastern coastal and adjacent inland districts and central and southern coastal and inland parts as a low pressure region lies through western parts of the state. There is the potential for some thunderstorms to become severe in the south during the afternoon and evening with the threat of localised strong to damaging winds, large hail and heavy rainfall. Localised moderate to heavy rainfall may lead to further flash flooding over the next 12-24 hours. Frequent cloud-to-ground lightning is also possible with any isolated severe thunderstorms that do develop over the forecast period.

VIC: A Fire Weather Warning is current for people situated within the Mallee fire weather district as the combination of high temperatures and low humidity and southwesterly winds during the afternoon elevate fire danger to severe thresholds. Isolated tending scattered showers and potentially severe thunderstorms are also possible across western, northern and central parts of the state today where localised strong to damaging winds, large hail and heavy rainfall may occur. Localised moderate to heavy rainfall may produce areas of flash flooding with frequent cloud-to-ground lightning possible with isolated thunderstorms.

Contact us if your organisation is looking to minimise risk against severe weather and natural hazards.

We have climate risk data to empower your business with all the intelligence needed to make informed decisions and assess the risk to regional scale changes in climate.

END_OF_DOCUMENT_TOKEN_TO_BE_REPLACED

QLD: Heavy rain areas with embedded storms are likely to gradually spread across parts of northern QLD during the day an...