Weather & Natural Hazards
Climatics is Australia’s most comprehensive database of historical acute and chronic severe weather hazards and warnings at any location since 1911.
Learn more
GO BACK
Everything your organisation needs to meet requirements on climate risks to people, assets and services.
Learn more

EWN can provide data from our internal GIS Platform via API for the following components: 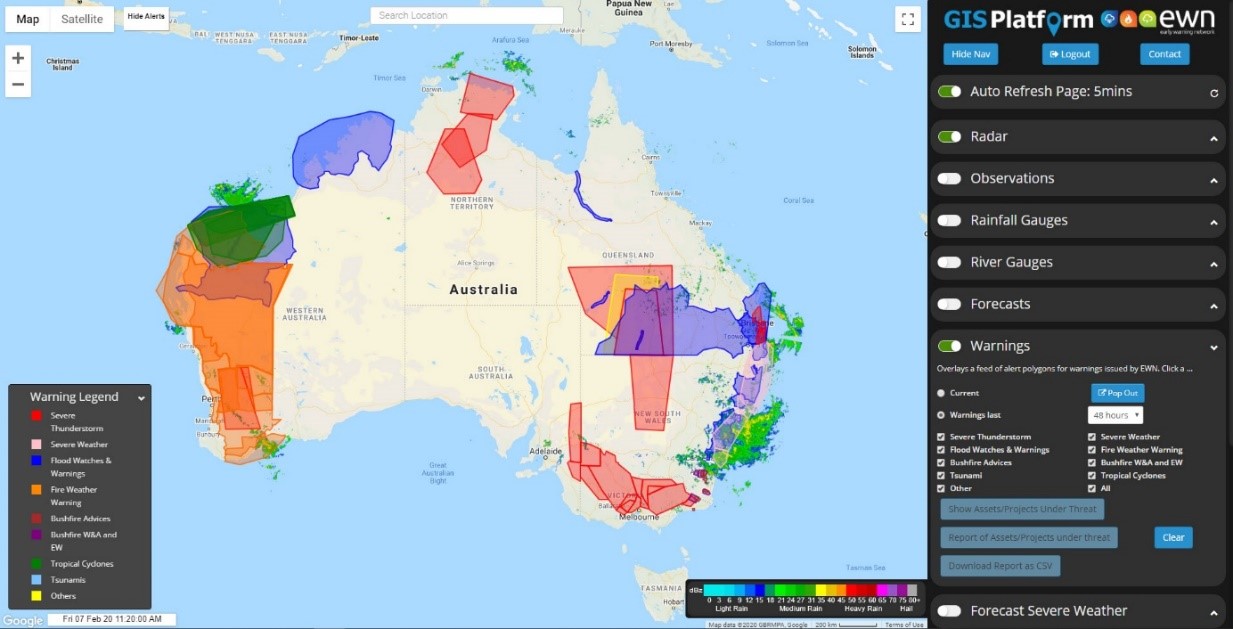 Radar and Alert data shown on the EWN GIS platform

The EWN Hail Alerting system monitors all weather radars (BOM owned) across Australia and scans for the detection of hail at all heights of the atmosphere.

Upon any storm where large hail is detected (2cm +), EWN Alert Operators will confirm it is a true reading and send out an immediate Hail Alert Polygon. The Hail Alert includes where the storm is, the size of the largest hail stones and the areas to be impacted over the next 30 to 60 minutes.

The image on the left shows EWN Hail software detecting large hail in numerous storms across the Greater Sydney Region. Hail markers are shown as triangles with the size in cms of the largest hail inside the triangle. Purple markers indicate giant hail. Directional arrows show the direction of the hail and allow for EWN staff to draw polygons and send a hail alert to clients via API.

The image on the right shows a cross section of the storm allowing EWN staff to view where the hail is and the set-up of the storm. 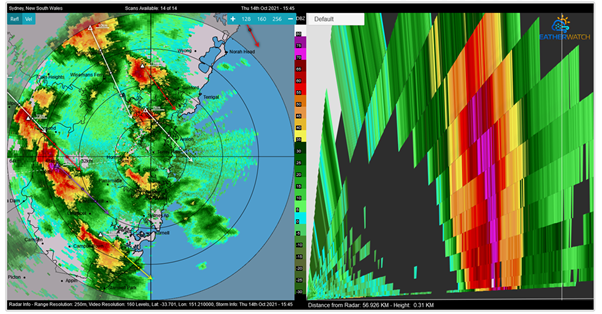 The EWN Lightning Network uses a series of Long-Range Detection points allowing for a truly accurate and clear picture of lightning across Australia and New Zealand.

Individual lightning discharges are captured in near real-time by a central processor that aggregates sensor data from the entire network. Using electronics sensitive to the Very Low Frequency (VLF) band, each sensor can detect lightning discharges with an astonishing 1KM lightning location accuracy.

The EWN Lightning Network is one of the most accurate systems covering Australia and in recent testing, picked up over double the amount of lightning than some other networks.

The added ability to be able to detect cloud to cloud lightning provides users in most cases with an advanced warning before cloud to ground lightning occurs. Besides safety, this ability improves operational efficiency, such as transportation route optimization and accurate warnings.

The EWN Lightning Network is available to organisations via an API feed in JSON format allowing you to plug the data directly into your own software web-based applications.

In order to use the API, you will need an API Key which EWN can provide.

Tell us about your project requirements. Connect with EWN.

Start monitoring and reporting on weather and natural hazard risks.